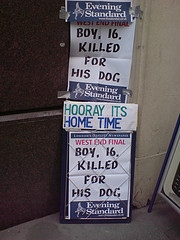 I read interesting article in The Economist about whether Britain is broken. It concluded that actually it was going to be OK. But that the media was whipping things up.

I know what it means.

I can’t click on Yahoo without some gruesome story popping up on the home page. It rattles me and adds to my view that life is going down the tubes, that everyone is horrible and that if we’re not constantly, exhaustively vigilant, horrible things will happen to us and our loved ones.

I have been railing for years now among my friends about the sensationalism of our local papers. They are propped up on boards in front of the local shops to scream the local horrors.

It’s insidious and I worry about the effect this has on children.

There is a sweet shop near the school my children attend. After school it is swarmed with little kids who are just beginning to read, buying their bag of sweets. (I know, I know, their teeth are going to fall out—but one crusade at a time.)

I have watched as both my children came of reading age and began deciphering the headlines. The shocked look as they worked their way through the line and the startled look on their faces. Then their turning towards me for an explanation. Unfortunately, I don’t have one.

So now if I see a particularly nasty one, I hurry them past, talking loudly about other things.

But I’m angry. I’ve often been tempted to take pictures of my kids licking their ice creams and standing on either side of one of these boards. Smiles on their little faces as they contemplate headlines like:

I’d had enough. I walked into the shop and asked for the owner to take it down. “Children come in here. That’s terrifying.”

It’s in his contract with the local papers, he said, he has to put them up. But to his credit he understood the mother angle would be particularly distressing to young children. So he took this one down.

I felt good about myself for about two days until the next headline appeared: