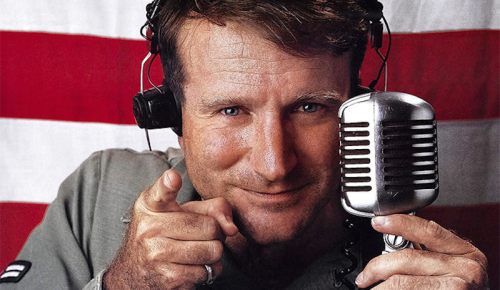 It’s been a hell of a month, so many conflicts, so many children dying, a disease raging in Africa, and yet it was only when Robin Williams died did I cry.

Call me heartless. But as I watched twitter and Facebook exude grief I realized I was not the only one truly saddened. And I think we were grieving because the two were so connected: the horror of the world and Robin William’s comedy.  And his rage. A rage that increasingly many of us feel deep down. He managed to turn the rage that seemed to burst from his hairy chest into belly laughs.

Most writers have depressive tendencies. After all it’s not really normal, is it, to step aside and create imaginary people to explain what the hell is going on. His people were legendary. He wrote them and he lived them in front of us like an age-old storyteller: Good Morning, Vietnam, Mork and Mindy, Dead Poets Society, The Fisher King to name just a few.

But there is a price to be paid. All that openness to man’s gory details, digging your hand into the bowels of humanity, mucking about to finding a gem, takes its toll.

And I think he’d run out of change.

We thought he’d always be there to get us through. I personally don’t think there is anyone out there within shooting distance of his talent.

And that makes a string of them. The good guys, the guys who are digging deep and offering us gems.

And it makes me very nervous….