My Hero in Publishing: Roelof Bakker 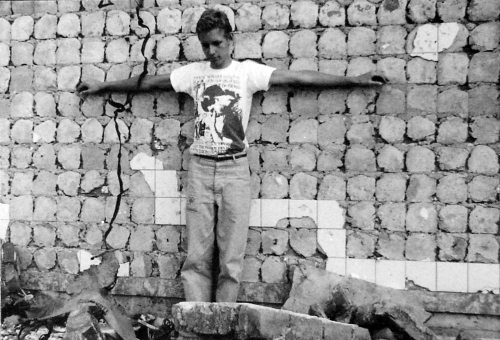 Publishing is hard. You know that. You’ve read about it. The constant refrain in the twitter/facebook/blogosphere of the death of the published work.

And then every once in a while you run into someone you really admire. Someone who doesn’t complain. Who just gets on with it.

So Roelof, instead of moaning and groaning, gathered an international group of writers and asked them to write stories inspired by his photos. (I was lucky enough to be included.)

He then created his own publishing company, Negative Press London, and published his photos along side the stories in a beautiful book called STILL.

It took vision, tenacity and determination.

Now, Roelof and Jane Wildgoose have just collaborated on a book called Strong Room which is out 21 January 2014.

Curious to see how he’s managed to do all this, I asked to interview him.

Read it, learn something.

Where are you from and how did you end up in London?

I was born in the Netherlands and came to London to visit my pen-pal. Once I was here, I realised I had the opportunity of a new life. With no qualifications and no direction I was drawn to the energy I felt around me.

Do you remember the first photo you took?

It was a self-portrait in black and white taken on a deserted demolition site. I was sixteen at the time and I’d just bought a small Olympus Pen camera. I was wearing a Joy Division T-shirt. I didn’t actually press the shutter, my brother did, after instructing him exactly on how I wanted the photograph to look.

Still was the first project where I recorded inside a vacated building. Previous projects mostly involved being outside in the open air, wandering, mainly in London, usually away from the crowds. For me, they all share a sense of emptiness but also of richness, of darkness and light, of life and death.

How did you come up with the idea of asking writers to contribute stories to Still?

The publication Still is part of a wider art project exploring ways to breathe life back into vacated spaces including a video film and an exhibition (www.rbakker.com/still). I wanted to continue the approach of giving new life to something devoid of life.

The idea was to set the photographs free from their location. It seemed fitting to allow the spaces to be filled with other people’s imaginations and that’s when I decided to invite writers to select a photograph and use this as a starting point for new writing. The first writer I contacted was local author Andrew Blackman, who had written about the exhibition Still on his blog, and his enthusiasm and initial support for the idea pushed the book forward.

How did you find working with writers? Are they a different breed to photographers?

It was very rewarding and highly inspirational. There was a lot of research involved finding writers, many late nights reading, particularly as I wanted to include writers from different backgrounds and cultures. I found them to be very open-minded and approachable. What made this anthology special is the fact that contributing writers would happily recommended other writers, making the book more fluid and unexpected: Andrew Blackman recommended Sarah Manyika, Nicholas Royle recommended Myriam Frey, James Miller recommended Deborah Klaassen. Meike Ziervogel of Peirene Press introduced me to Jan van Mersbergen and you came through Meike too.

It was incredibly exciting when the stories started coming in. Andrew Blackman’s ‘Sanctuary’ first arrived and then your contribution ‘My Wife, the Hyena’. It was not what I had expected at all, very dark and twisted. But as with Andrew’s story, it set the tone for what was to come: there is a sense of darkness in all the stories.

I think both writers and photographers have an inner need to explore and express, but writers have more creative scope as there are less limitations, there’s no permission for access. I love the idea that words can create the most beautiful or the most horrid visuals, that words alone can move. Writers can travel to places where photographers can never go, into the future or the past, into landscapes of the imagination. At the same time there is great creativity to be found in the limitations encountered by photographers.

There’s a pressure on photographers and visual artists to explain their work and to intellectualise and contextualise it in language. But photography and other visual arts are means of communication. Visuals can speak for themselves.

What has been successful about the book collaboration and what would you do differently?

The book became so much more than I set out to. I think the writing is superb and I like how the photographs and the individual stories appear together, giving a window into the mindset of writers, how a photograph might inspire a piece of writing.

For me, the book has many layers. It’s about the skill of writing and creative freedom, about inspiration and collaboration. It’s an anthology of international writing and of writers from all kinds of backgrounds. It’s a photography book of vacated spaces, but also a document of aspects of past municipal life. The writing, photography and design combined make it a literary art book (a term coined by writer James Miller).

When writer Nicholas Royle suggested I’d start a press I decided to go for it and consequently started Negative Press London (www.neg-press.com), getting advice from Nicholas – who also runs a small press, Nightjar Press; Jan Woolf – writer and editor at Muswell Press and later on from Meike Ziervogel from Peirene Press.

What I would do differently? I really underestimated the work involved in starting a press…. designing logos, forms, a website, an online shop; dealing with printers and buyers, legal stuff, organising a launch event, then there was the PR, social media, etc. So if I would do something on a similar scale, I wouldn’t do it alone.

What has been the response to Still?

The response has been very positive, often overwhelming. David Hebbletwaite reviewed every individual story on his blog over a 26-day period (http://davidhblog.wordpress.com/2012/09/26/roelof-bakker-ed-still-short-stories-inspired-by-photographs-of-vacated-places-2012/). Sara Baume, recently reviewed it for the Short Review, said the book had perhaps invented a sort-of new genre (http://thenewshortreview.wordpress.com/2013/11/14/review-of-still-short-stories-inspired-by-photographs-of-vacated-spaces/).

It is also a great compliment that one of the stories, by a certain Nina Killham!, was selected to appear in the Best British Short Stories 2013 (Salt publishing, 2013).

Tell me a bit about your new book Strong Room. Was it easier working with just one writer?

Strong Room is more of an understated publication than Still. The approach is of an artist book, not a literary publication. This time the photographs take centre stage with an essay appearing before and after the photography section. Unlike Still, there was no preconceived idea or approach.

I worked with fellow artist and writer Jane Wildgoose. We have a shared interest in memory and remembrance, in traces of past lives. I admire her work, her passion, her intelligence, her individual eye. (www.janewildgoose.co.uk). We both also have a connection with Hornsey Town Hall where the photographs in the book were taken. They’d been developing in my head for the past few years. I sensed there was something important there, something powerful, but I didn’t know quite how to use them. Then I met Jane and I knew that if we worked together it would result in something unexpected, an important document.

After discussions and explorations the book began to take shape. I edited the photographs down to a selection of twenty-eight and played around with the running order, then I wrote the introductory essay. The photographs show unusually well-preserved traces of past lives in spaces that have remained almost untouched over thirty years. It was a new challenge for me to use photographs as inspiration to write about something contemporary that deeply concerns me, and, at the same time, to allow the photographs to be what they are, to give them their own space, to tell their own stories. Then Jane wrote her essay. We both have something different to say, but there’s a shared sense of the importance of the physical connection and the impact of the loss of the tactile experience in the digital world. Strong Room has many layers and Jane’s contribution ‘A Visit to the Archives’, can be read as an academic essay or a short story, it’s a unique proposition.

You are in a field that must be even harder than writing. What keeps you going?

I work as a freelance designer and photographer – I started taking on portrait photography commissions in 2012. I’m also the house photographer for Dennis Severs House. There’s always some juggling going on. My art explorations are what drives me, I experiment a lot and discard ideas, but the knowledge that with focus and dedication, ideas develop and come to fruition is what makes me tick.

What is next for you?

Jane and I will be attending a Writers Guild of Great Britain event in January to talk about our exchange and about using visuals as inspiration for writing. There are two Negative Press publications in development and I’m putting together work for an exhibition in 2014. I am curating a series of CCTV-inspired video works as part of a project called Wanderlust, working with photographers from different countries. (www.rbakker.com/wanderlust). Inspired by the stories in Still, I have started writing and one story, ‘Red’, will appear in Unthology 5 (Unthank Books, July 2014).

photo: a self portrait by Roelof Bakker

3 responses to “My Hero in Publishing: Roelof Bakker”